The kennel and my breeding

The kennel prefix Watch’em was approved by the FCI and the Swedish Kennel Club (SKK) in May 2012. I hadn’t gotten my first whippet yet but I already knew I wanted to be a breeder in the future as it began to interest me when I started competing with dogs, watching pedigrees and studying up on genetics. It took a while but in 2020 I finally had my first litter and I think it’s a good thing as I had many years to think about what I believe is important in the whippet breed and what qualities I would like my dogs and future puppies to have.

I will only breed dogs together who are healthy and have a nice temperament but they also need to have performed well on the racetrack and preferably in lure coursing too. I’m also taking their genetics and pedigree into consideration to try to figure out what their puppies could be like. 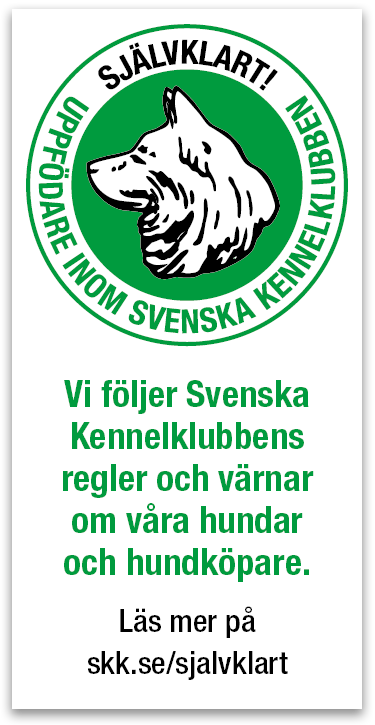 A bit about me

My name is Jinny Balogh and I’m 29 years old. I live with my fiancé and our two boys in a small house with a big garden in the village of Oskarström in the southwest of Sweden. Right now I study to be a canineopat (that works in dog rehab) at UPH.

I bought my first dog back in 2005 when I was 14 years and that dog was a lovely mix named Tobias. With him I tried a wide range of dog training methods and we competed in agility a few times but most of all he he was my friend and he taught me so much about dogs and ignited the spark that is my love and passion for dogs. After agility I took an interest in dog shows when I had tried it with my mother’s dachshound, so after a lot of thinking I chose to look for a whippet which I had seen from afar and thought so elegant, calm and just the right size.

So in 2014 I got my first whippet, 1-year-old Marvin. With him I went to shows, and tried whippet race, lure coursing and oval track. He got his licenses and competed in all disciples and got some good results here and there. When I’d had Marvin for 1,5 years Lucy moved in and we went to many, many shows with some success. By the time Lucy was growing up I had started track racing with Marvin and it became my new passion so I bought my first racebred whippet, Bellamy. That way it went with the pack later joined by Bellamy’s little sister Aayla and then Skye from my first litter.

Aside from leading a dog crazed life with races almost every weekend during season I of course spend my free time with my family and I try to find time to photograph which I have done in a semi-professional matter for over a decade. I usually get some reading done almost every day as well.

What I wish from you