Bellamy, Bellamy, Bellamy. There’s so much to say about this lovely dog. First of all, she is my dream dog. I got her on a whim but it was love from the beginning. She is my first racing whippet and what a talent she turned out to be, after a very rocky start when she didn’t run clean on the track and it turned out she had a small muscle injury that would still hurt a lot when performing such a high-intensity activity as racing. But I didn’t even found out about the injury until after she was very badly hurt in a fight with Lucy in February 2019. It took Bellamy months to recover and she sadly has a tendon or ligament injury that will always affect her. And still, after all that, she ran an amazing season with eight elite times over all distances, and four more in the short season of 2020. How good would’ve she been without any injuries? I bet even better.

Her story can tell a bit about what a fighter she is and how tough she is. Bellamy is an intense dog (for a whippet) and she is not soft. Don’t get it wrong, she is a very kind girl, loves to cuddle and wants you to pet her at all times if possible, but she can also stare off another dog from the lure and she doesn’t back down if someone messes with her. She has got an intelligence and will-to-please that makes her fun and easy to train and she would never say no to any activity. At the same time she also occupies the couch in typical whippet style poses such as her legs in the air or curled up as a cinnamon bun.

Bellamy loves people and will gladly throw herself in the lap of any new person she meets, and don’t forget the intense kisses. If she really loves and knows someone, such as her breeders Martina and Mike, she will jump up in their arms when they are standing and in complete trust expect them to catch her. She also jumps easily over gates and fences if she wants to and when she’s going to the starting boxes at the track she jumps up and down like a kangaroo even if I have tried to stop that behaviour so she doesn’t hurt herself. Bellamy has got integrity and values her personal space when she is focused before a race.

She is nice to walk with and also a great running and biking companion. She doesn’t tire easily and is good at long distances. She has got a long stride and when she is out running with me she doesn’t even fall into a trot most of the time. On open places like the beach Bellamy can run off leash and run after birds in the shallow ocean but in the forest she soon finds an animal track and follows it off the trail so I have to keep her on the leash there because I can’t see her. She is normally a very obedient dog but when there is wildlife, or even better – cats – she goes crazy and would love to run after them. She is also very talkative. She whines, barks, howls, growls and screams (when seeing cats) and you can have an entire conversation with her.

Bellamy is lightly built with long legs, a strong, long back and long tail. Her angulations are great and her feet are good and not prone to injury. Her head is beautiful and feminine and her ears are pretty and correct. She could have a bit more width and depth in her chest so when choosing a male for her I chose Ok-Bleuy, a package of width and muscle, and the result was the Imagine Dragonslitter in 2020. Bellamy is fast, quick and agile and have achieved great results in lure coursing as well. I truly am lucky to have gotten such a great dog, not just for racing, but to share my life with every single day, whatever I do and however I feel. 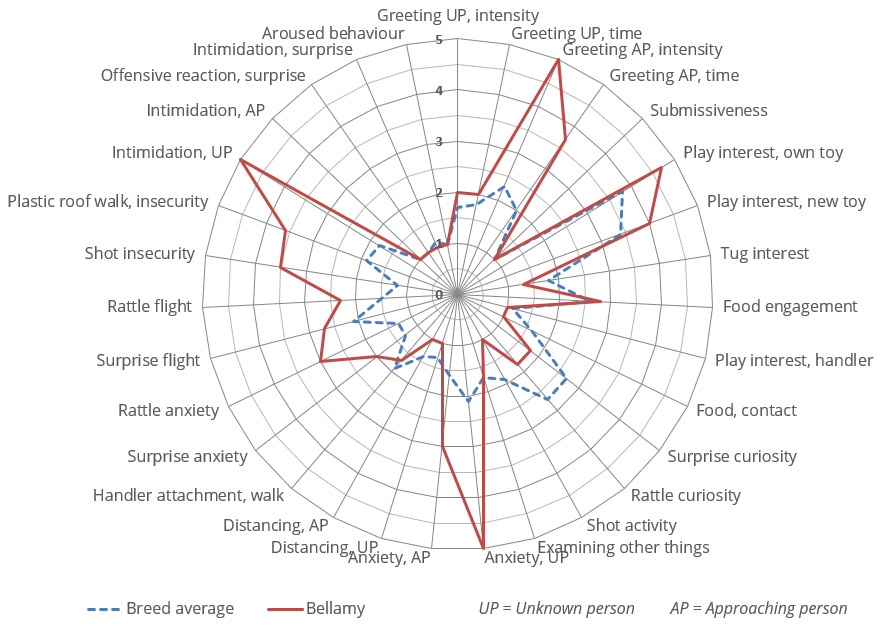 Bellamy did BPH with gunshot at the age of 12 months and 4 days and in the chart you can see her test summary compared to the breed average. I have tried to translate it to English but it is best understood by reading the full protocol (in Swedish) here.

As the name suggests, whippet race is for whippets only (other breeds are welcome at practice) and is a straight race run on grass, ending in a sand pit. The length is around 137,5 m, or 150 yards. The dogs run four at a time in red, blue, white or black shirt and are required to wear a leather muzzle.